I’m Aurélien Blériot, known as Bombo on DuelingBook (formerly Dueling Network). YCS Bochum was where it all ended back in december 2016, and where it all started again this february, from friday 23 to sunday 25. I’ll give my full report of the way I’ve lived this event in this article.

Whether we’d go to Bochum or not with my friends was an unsure matter till the 13th of february. It was a rush from there. The last time i’ve played Yu-Gi-Oh was for London format (Spyral tiers 0), just to support my friends going there. While I performed very well on DuelingBook with the list i’ve honed, none of my friends actually played it for the event. They all scrubbed (that’ll teach them).

But I haven’t played any Yu-Gi-Oh ever since, while they were hyped on full power Magicians and playtested like devils the whole january, with triple Double Iris and Skullcrobat Joker, and urged me to do so. Needless to say, I mocked them when the banlist fell like a guillotine blade : Magician wasn’t the broken tiers 0 it was meant to be anymore. I’ll discuss the matter of picking a deck for Bochum in a latter section.

Bochum required at least some training before I jumped in, so we booked a last minute trip to the biggest regional of France that incidentally happened the week before : Châteauroux. I barely gathered the cards I needed for the deck, I haven’t tried the list enough, and I was basically too rusty and too kind this regional. I lost to scrubby moves from both me and my opponents, but I was glad to see the familiar faces again.

On a funny note, Nepthys attended the event as well, with probably the exact same list he used to « perfect » Bochum. He scrubbed this regional as well, while my friend Simon Leforestier did a straight 7-0 with a Magician deck he’s been playing for so long.

Pro-Talk: Kevin Semlali
We are here with Kevin Semlali “Nephtys” from France, Paris. Kevin entered Round 11 with a perfect X:0 record. In Round 11 he had to face Lars Junginger with True Dracos, taking an unfortunate loss due to too many floodgates.

I had booked the airbnb for Bochum for quite some time, but I wasn’t sure we’d go till the very end. To be honest, nothing was very enticing : it’s a 10-hour trip by car, the city isn’t very pretty, the format was bad, and I barely had time to playtest my way. At least we were ensured to see all our friends from Europe, and the food is affordable… like, cheap.

We did the car trip for the last YCS Bochum. But somehow, this one took an heavier toll on us. We were basically dead the whole friday and the next monday, after coming back to France. The cold weather didn’t help either. It’s probably the last time we’re doing such a thing. We haven’t picked up information about the alternatives, but we’ll sure take a look next time.

The format was expected to be cheesy. The banlist was announced very recently, and a lot of players dismissed Magicians, much to their mistake. No deck seemed to be outstanding and everybody lacked playtesting time basically. Atlanta didn’t quite help and, even worse, distorted the data by introducing FTK, a deck that legitimately frightened everybody.

While Magicians broke half of the top 32 at Atlanta, I was convinced it was a very average deck for it lacks good cards, except for Harmonizing Magician. The deck doesn’t achieve anything first turn (2 negates is ridiculous) and seems more cumfortable at going 2nd, breaking boards. But then it gets exposed to floodgates. They also need at least 3 cards to start their plays, which is dangerously too much in my opinion.

Magicians FTK gave an actual reason for this deck to exist. It was overall stable, actually had a turn 1, and could end on a regular magician board if met with an handtrap, except for the lack of recovery turn 3. The rise of FTK was something we couldn’t overlook and everybody has been prompt to maindeck and side handtraps to counter it.

CCG guys have splashed Mythical Beasts in this deck, as it gave access to Jackal Knight that enabled to disrupt handtraps turn 0. Basically you use Instant Fusion, tribute Lyrilusc for Jackal, do your things and it’s gg. Cerberus is also a fantastic bait, and Jackal eff in scale gave an easier access to Electrumite before you pendulum summon. I think it was a really clever strategy that surprisingly only paid off for one of them.

Trickstars and Invoked were out of the picture. These decks are terrible in my opinion. They rely solely on the handtraps they’re having turn 0, and pretty much can’t do relevant plays. They lack options, attack power… Their only advantage is to be able to play Scapegoat, which is kind of degen.

The actual power deck wasn’t Magician in my opinion, but True Draco. Magicians don’t have a crippling turn 1 (except for FTK), they don’t achieve something well-defined. They’re a good reactive deck but not a deck you build to play against except for the fact they’re expected to be the most played deck.

On the other side, True Draco had a very clear purpose (a boss monster, a floodgate) that calls game if not cleared in a turn ; Magicians usually needed a second turn to be able to OTK. But ironically, Magicians is the deck that had the easiest out to Master Peace without calling luck on handtraps or playing bad cards maindeck, while being achievable under Erupt/Drain : it was Purple Poison. We’re in an awkward situation in which the most represented deck is the most versatile, but certainly not the most powerful. Which gave a lot of space to rogues.

And that’s what happened : despite a record in attendance, a complete rogue (World Chalice) won the tournament, a lot of new names made it through the top 32 and usual players didn’t make it, some not even doing day 2.

I was myself one of these rogues player.

I’ve developed earlier the cons I’ve seen in playing Magician. Plus, I’ve never played any pendulum deck before. I didn’t like the mechanic overall, as an oldfart of Yu-Gi-Oh. This deck has some technical moves I couldn’t master in just 10 days, and that was just the maindeck part of the problem.

Despite my resent towards Pendulum, i was convinced by Ny3’s Zefra deck and changed it my way. I lacked playtesting though, and i’d change things if I were to play Bochum this week-end for instance. Shoutout to him, subscribe to his channel

Zefra had the most appealing feature : it only needed two cards (Zefraath and any low scale) to build a board, by pendulum summoning a zefraniu in case things turned bad. But if electrumite was summoned before the pendulum and his effects went through, the deck becomes litteral nuts, packing at least 3 negates. It has the major inconvenient of playing a lot of bricks though, and a single ogre on electrumite or Zefraath could end your game in a very premature way. Still, it had a plan turn 1 and a bandwagon of negates few decks are actually capable to deal with.

Though, I realized the deck had difficulty summoning big monsters that could rid of anything that has more than 2500 atk, and was sensitive to more handtraps than Magician, dying on droll, cherries and a well-timed ogre. I’d have changed the list towards answering these situations, with things like Utopia Beyond, 3rd niu maindeck… The purpose of the side was to address floodgates and FTKs, the only thing the deck had a bad matchup against.

Zefra is popular in OCG but plays very differently. They build their deck around Crystron Needflefiber, and Zefras are there for their good search & negate engine. Ours is oriented towards Pendulum and Electrumite.

I performed good for the first four rounds, winning against both Josh from the CCG, but lost my motivation after I got slowplayed against, that resulted in a draw, while I was in a winning position and had a better knowledge of both our decks. I was morally mined by the fact it was coming from a guy I knew well, a feeling that messed up with the rest of my event. Regardless, I think the deck is solid.

What to expect now ?

The awkwardness is reaching heights, as Ed Acepcion said after topping UDS with Magical Muskeeter : « Any deck can win this format ».

Three FTKs have made it to the top 32 : 2 Magician and 1 Gem-Knight. Konami has stated no banlist will be released till at least april, so we’ll have to live with these decks for quite some time. I’m pretty sure other FTKs are possible. What’s more fearful is that the next main set release might get us Crystron Needlefiber, which imports some FTKs as well. If these get more consistent, more popular or whatever, we’ll face these vs handtraps format. And in the meantime, we’re sure the main set will get us Infinite Transcience, which is yet another good handtrap.

I’ve come to this conclusion : because of the absurd amount of handtraps, it’s hazardous to play combo decks. So if you want to play them, Konami leaves you no choice but to play actual FTKs. If you’re willing to take risk of making meaningful plays that gets cockblocked by multiple handtraps, you’d rather push it to a FTK to punish handtrap players. It’s sad, but we’re slowly going to a point in which the safest, most rewarding option will be to run decks that pack a very small engine that’s searchable between itself and a shit ton of handtraps and bland, generic cards (Scapegoat, TT, Strike…) around to ensure your opponent cannot play. I’m thinking about Trickstar, about Invoked, but even Ed’s Muskeeters could fit the bill. See how archetypes have evolved ? Before, you had to suffer the pain of opening 20 different X sabers before you could get 3 that made the deck playable, at the very end. Now, archetypes come in small packages, with already a themed Stratos, a themed Monster Reborn and a themed Terraforming target.

And I think playing these and against these decks is much more boring than playing with or against FTKs, for real.

We’ll see what’s going to be imported in FLOD. The core doesn’t seem to bring relevant archetypes, but some staples including a card that hardblocks traps (Red Reboot, and it’s amazing) and another one that negates a handtrap. I don’t think that’s a good idea, to be honest. I don’t want Konami to tell me, « See, handtraps are fine, you have 3 unsearchable cards that you have to maindeck to counter it in the eventuality your opponent would play those bad cards to break your flow ». But this is basically what they’re doing with Called by the Grave.

I wish I could end on a more relevant conclusion, but I don’t think of anything to add at this point. This format will be boring until the next set, but i’m not expecting much when it’ll happen. See you for the nats & european championships 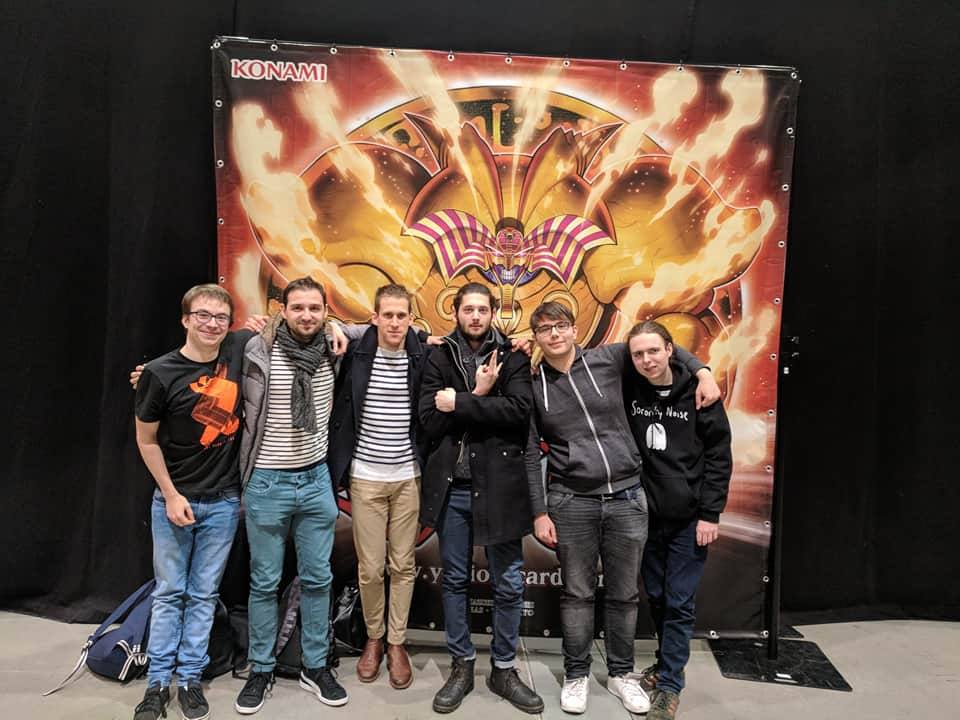